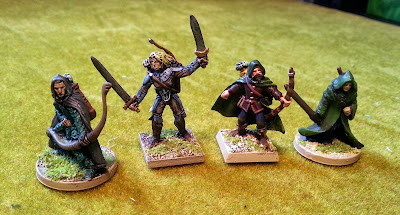 You are a tough wilderness warrior, living and lurking at the fringe of civilised areas. Your life is often a lonely one but you can guide adventuring parties across dangerous regions. You are trained to survive in wilderness environment.

Hit Die: d10
Alignment: Rangers adhere to different moral codes by are often fighting to protect the Balance of the Nature; so they are usually neutral. Chaotic rangers are fearless raiders, Nature defender extremist, obsessive trophy hunter and sometimes human hunter . Lawful rangers acts as army scouts, skirmishers,  frontiersmen patrolling the marches or  bounty hunters tracking down criminals for the rewards offered. Neutral rangers are often lone wanderers following their own way.
Weapons and Armors: Rangers are trained with these weapons :  club, crossbow, dagger, dart, handaxe, javelin, longbow, longsword, mace, shortbow, shortsword, sling, spear, staff. Rangers do not use combination of shield and armor with a total Physical Penalty of -6 or higher

Wilderness Skills: A long life in the wilderness area trains Rangers to survive in natural hostile environment. Ranger receive a bonus to skills checks equal to his class level plus Ability Modifier.

Survival  (Personality) : This skill allows the Ranger to find shelter and sustenance (food, water), to start fire, to find direction and give some local knowledge (geography, animal, plants). The Ranger can follow tracks of any creature, identify them and tell the number. He can also conceal his own tracks. DC 10  is for famliar terrain, 15 if the ranger is not alone (between 2 and 8 people) and 20 if not familiar with the terrain or environment or if there is more than 8 people.

Sneak and Hide (Agilty) : Rangers are very good at stealth in natural environment, sneaking silently and hiding in natural cover. This can be used in the same manner as a thief’s abilities.
Climb natural slopes (Agilty) :Rangers can climb natural slopes, steep hillsides and trees. DC 20 is a very steep cliff. A tall tree with few low branches low is DC 10.
Find and neutralize natural trap (Agility) : Rangers can detect, neutralize and build simple natural traps. A large, bulky trap is DC 10 (pit in the floor covered by brush, or snares). More subtle traps are DC 15, 20, or even higher. A natural 1 on these checks triggers the trap.

At Level 1, the ranger must choose one type of favored enemies in the following list : lawful humanoids (bugbears, goblins, hobgoblins), neutral humanoids (kobolds), chaotic humanoids (gnoll, orcs) and chaotic giants (cyclops, hill giants, frost giants, fire giants, cloud giants, ogres). At level 3, 6 and 9, the ranger can choose another favored enemies type but the ranger must have already fought this enemy. Judge can allows the player to choose other types of favored enemies as perversions of nature (slimes, etc.), ape-men, lizardmen, or even subhumans, humans or demi-humans. The Judge may prohibit the improve of the Deed Die by one shift if the ranger has not fought his favored enemies sometime while progressing through his or her previous level.
Ranger Path: Ranger must choose one of these two paths:
Luck: While outdoors, if the ranger rolls under his luck score, he is not surprised.
Action dice: A Ranger always uses his action dice for attacks. At 5th level a ranger gains a second attack for each round with his second attack die.

Languages : A ranger knows two additional languages for every point of Int modifier. These languages must be one of his favored enemies (bugbear, goblin, gnoll, hobgoblin, kobold, ogre, orc, giant) or animal one (bear, eagle, ferret, horse, wolf).

A ranger attack modifier is rolled anew, according to the appropriate die, with each attack. The result modifies both attack and damage rolls. When fighting favored enemies, the Deed Dice is improved by one shift.